According to current scientific understanding, the New Madrid Seismic Zone is capable of producing damaging earthquakes at any time.      The earthquakes of 1811-12 were estimated to be between a M7.0-8.0 and occurred in an area that was sparsely populated.  Were these    earthquakes to occur today, their effects would be considered catastrophic, directly affecting several million people across eight states and    indirectly affecting millions of others.  In an effort to prepare for this, the Federal Emergency Management Agency (FEMA) provided    funding to CUSEC to lead an effort to develop, improve, and integrate the earthquake response plans of the eight states in the region—    Alabama, Arkansas, Illinois, Indiana, Kentucky, Mississippi, Missouri, and Tennessee—that would be most affected by an earthquake.

Officially started in 2006, the New Madrid Seismic Zone (NMSZ) Catastrophic Planning Project, remains the largest multi-state response planning effort of its kind, and drew upon lessons learned from previous planning initiatives throughout the nation.  The effort also helped establish and refine portions of the National Response Framework, an all-hazards guide that establishes how the Nation will respond to small and large scale disasters. The priorities for project were set by CUSEC’s Board of Directors, which is comprised of the state emergency management directors from the eight CUSEC Member states.  As state directors, the CUSEC Board is in a unique position to know exactly what is needed to prepare the region for a catastrophic event such as an earthquake.  CUSEC is a peer-based organization where planning and response choices in the key areas of strategy, tactics, and operations are made by councils of peers drawn from every level and function for discussion and sharing of best practices.

The concept selected to achieve these priorities was a scenario-driven planning process that, at the time, was new and unique.  The M7.7 New Madrid earthquake scenario was developed by the Mid-America Earthquake Center (MAE Center), George Washington University, and Virginia Tech, and was in partnership with the U.S. Geological Survey, and Association of CUSEC State Geologists.  The planning involved representatives from the entire spectrum of emergency management, including first responders, planners, and decision makers from the local, state, and federal levels.  Private sector, non-profit, and research centers were also included in the planning process.  These individuals and organizations worked in a collaborative effort, much like they would when responding to an incident, to develop the various response plans.

Over five years, this CUSEC led effort built response plans from the ground up beginning at the city and county level and leading to a statewide planning workshop in each state. Local and State workshops led to regional based workshops, one in each FEMA region covering the CUSEC Member States.  The regional workshops led to a Resource Allocation Workshop (RAW), providing an opportunity for comprehensive planning to coordinate mobilization, staging, deployment, and tracking of the vast amount of resources needed in such a catastrophic event as a New Madrid earthquake. The five years of work in scenario-driven catastrophic planning culminated with the National Level Exercise 2011 (NLE-11) that simulated a NMSZ and Wabash Valley Seismic Zone earthquake event.  This was the first time that a natural hazard was used as a focus for a National Level Exercise.

The most significant result of the Catastrophic Planning Project has been the comprehensive efforts undertaken by the eight states to create a detailed response plan to any major disaster scenario. The Project allowed the states to overcome obstacles that had limited them in the past and get down to the details of linking their requirements to actual state and federal capabilities. In the past several years, these efforts have already resulted in direct real world benefits in when CUSEC Member States.  The States have been able to use the plans and lessons learned from the planning process to respond to a wide range of disasters including ice storms, flooding, and widespread severe weather and tornado outbreaks.

In December of 2011, CUSEC prepared an “After Action Report” for the NMSZ Catastrophic Planning Project (13MB PDF). This report catalogs in detail the five years of planning efforts and highly successful results of the project and the NLE-11.  While the efforts of CUSEC over the past five years have led Member States to their greatest level of preparedness in the past twenty-five years, it is only a beginning and requires continued support from national leadership to keep and improve all levels of disaster preparedness.  This report identifies the lessons learned and provides recommendations to build upon this important undertaking.  The CUSEC Board of Directors has listed several key activities that will take place over the next three years which will lead up to another major exercise, known as CAPSTONE 14.  This event will allow Member States to further refine and develop response and recovery capabilities in preparation for a major disaster. 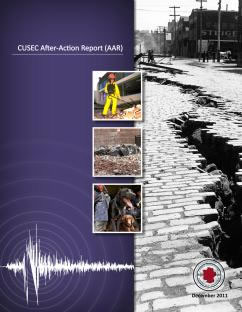 The 2020 National Earthquake Conference will be March 4-6, 2020 in San Diego, California. Register today at www.earthquakeconference.org.